Select a News Category OR a Department to narrow the News listing.

The Norristown Area Census Office will hold a major Census 2020 hiring event on Thursday, January 23rd at the Montgomery County OIC (1101 Arch Street, Norristown), for part-time positions that pay up to $27 per hour. The event will take place from 3 to 7 p.m.

This year in 2020, the Federal government will conduct its decennial count of the population, which it has done every 10 years since 1790, after it was written into the United States Constitution. For the first time, the U.S. Census Bureau will accept responses online and by phone (though you can still respond by mail).

It is vitally important that each Lower Merion resident is accounted for in the Census.

“Unlike 10 years ago, we now live in a world in which more local governments are using data to guide their decisions,” according to a recent article in the trade journal Government Technology. “Some of the actual data is often derived from the Census, increasing the stakes for communities this time around.”

It’s not just Federal dollars and proper political representation that is at stake—though those two factors remain as important as ever. These days, Census-driven data influences private-sector decisions like never before. Businesses use data from the Census to find out where to locate operations. Many national companies, whether retail or professional, never locate a new operation without looking at Census data.

The reference day for the 2020 Census is April 1st, by tradition. Over the next few months, look for more information here on the LowerMerion.org home page, on our social media networks (Facebook and Twitter), posters around town, and on LMTV to learn more about local efforts to increase awareness of the Census and it importance, and ways that you can help to spread the word and get every Township resident counted.

Go to 2020census.gov for much, much more information on this extremely important topic for our local economy. And please click on that center button labelled “Get Involved.”

There are three ways to respond to the 2020 Census.

Census Takers in Your Neighborhood

You may notice census takers in your neighborhood. This is a normal part of preparations for the 2020 Census. Census Bureau employees will also be in the community to continue collecting information for the American Community Survey and other ongoing surveys. 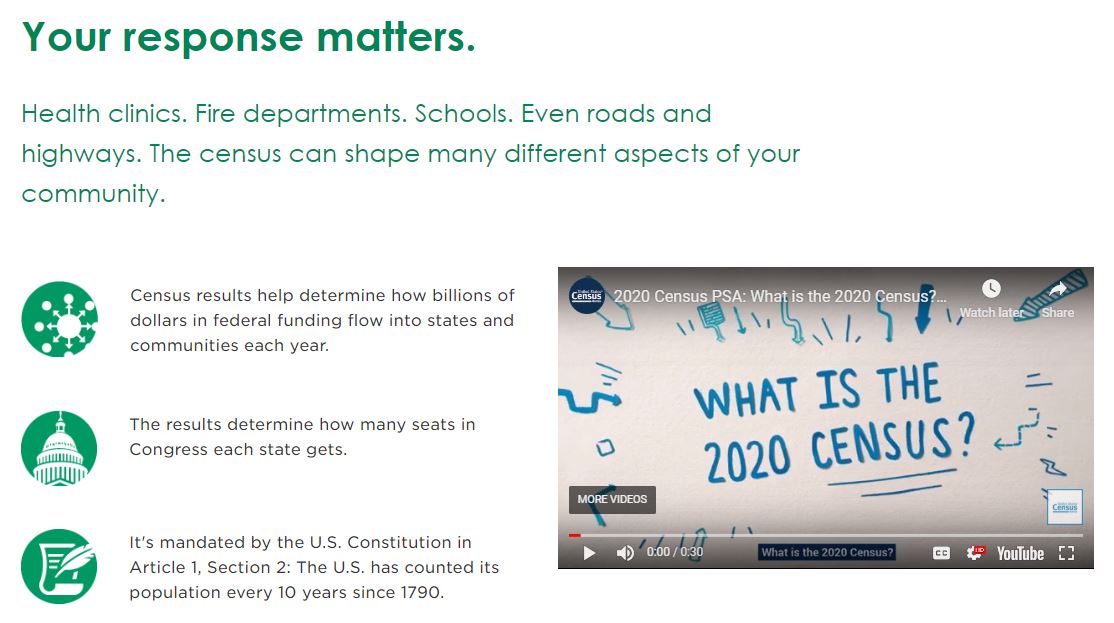